WebGL is a Javascript API for rendering 3D graphics within web browsers. Currently there are two major versions: WebGL 1.0 and WebGL 2.0.

The browser support statistics for each WebGL version could be found at WebGL Stats.

To understand how WebGL works, we need to start from the big picture. Modern computing devices have multiple processors and different types of memories working together to accomplish graphics rendering. These components are shown below:

If our program wants to render a geometry shape, it first needs to upload the geometry vertices and color information to the GPU Memory and then calls a shader Program. This shader Program runs on GPU and it tells the GPU how to draw this geometry shape with the uploaded geometry data.

In summary, javascript program runs on CPU and it creates a shader program to run on GPU. This shader program is responsible for graphics rendering and is written in a language called OpenGL ES Shading Language.

To understand how shader program works, it's important to know what is graphics pipeline. 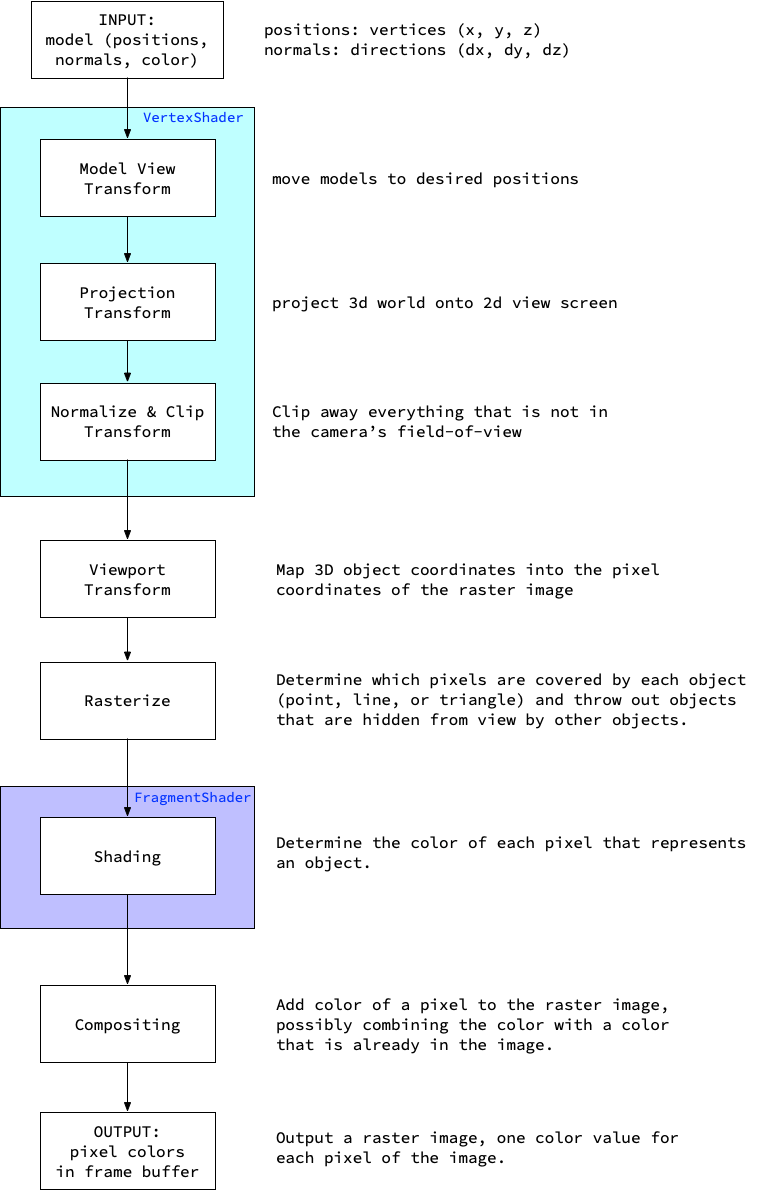 As we can see in the diagram, there are two types of shader program:

There is one thing to keep in mind here, the vertex shader program runs like this:

You may be wondering, is it too slow if we run the same program for each of the vertex and pixel? Yes, that's why GPU is invented. GPU is designed to run programs in parallel. Suppose our GPU has 1000 cores, the speed of execution for all programs could be at least 1000 times faster than one CPU core. In this scenario, memory access speed is also critical to performance, so engineers add a special designed memory system for fast access. And when we call shader programs, data should be uploaded to the GPU memory first.

Our model is described in points (x,y,z), lines and triangles. The job of the graphics pipeline is to map these geometry primitives in 3D space onto the surface of our display plane in 2D space, and to give each pixel an appropriate color to make objects in the rasterized 2D image look like a 3D object. In order for our brain to believe these rendered objects are in 3D space, the colors assigned to each pixel should follow laws of light in physics.

Before dive into code details, we need to understand the coordinate system of WebGL.

In the rest of the article, our WebGL shader examples will be implemented using TWGL.js which is a tiny wrapper API around the original WebGL API. And shader code will be written in GLSL ES 1.00 of WebGL 1.0.

This is a tiny exmaple copied from TWGL tiny example.

In the above example, there are some built-in variables in Vertex Shader and Fragment Shader.